The Gulf of Naples is embellished with several islands, known for their beauty, evocative panoramas and unique natural and cultural characteristics in the world.

In order of extension we speak of Ischia, Capri and Procida.

The island of Ischia is the largest of the islands in the Gulf of Naples. It is called “Green Island” for its abundant vegetation, favored by the fertility of the soil and an always mild climate. It is a volcanic island, in fact it offers thermal springs and natural pools in every corner, to dedicate itself to baths, muds, inhalations and massages.

Of the six municipalities that make it up, Ischia is certainly the most populated. There are about 18 thousand inhabitants who live mainly between the areas of Ischia Ponte, Ischia Porto and Campagnano. It is very suggestive to cross the historic center of Ischia Ponte, full of alleys and ancient shops. Here you can not miss a stop at the Aragonese Castle, from the Middle Ages, a symbol of the struggles waged by the inhabitants of the island to face the furious Saracen attacks. Do not miss also the Cathedral of the Assumption, whose crypt houses the frescoes of Giotto’s school.

The smell of salt typical of Ischia Porto and Ischia Ponte is fading away as you go up to the Campagnano area, the highest part of the municipality, populated mostly by farmers. Here, in fact, to excel is the smell of the earth and the vines grown in this area. 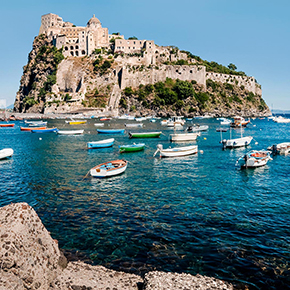 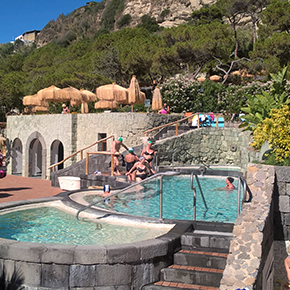 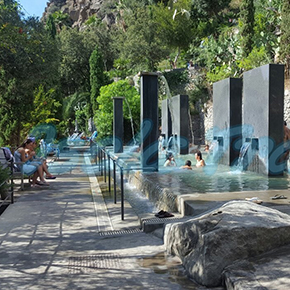 The island of Capri, also called “Blue Island”, is a small corner of paradise out of this world. Land of poets, writers and legendary characters. Here a particular atmosphere hovers, where history, archeology, literature coexist harmoniously in a breathtaking landscape.

The island is divided into two municipalities: Capri and Anacapri. The first is the image of the island, the second is its essence. The well-known Capri square, usually frequented by Italian and international celebrities and the luxurious shop windows of Via Camerelle, are the classic starting point to visit it. Every corner here has its charm. On a hill there are the ruins of Villa Jovis, a splendid example of an imperial Roman villa. Do not miss the Augustus gardens of the 1930s and the Certosa di San Giacomo.

But to visit the island fully, a boat ride is recommended. The rocky and rugged coast of Capri hides wonderful caves among its inlets. Celeberrima is the Blue Grotto of Anacapri, as well as the Faraglioni, three peaks of rock immersed in limpid and crystalline waters that create an evocative scenographic and landscape effect. Do not miss the Punta Carena Lighthouse, a place still little contaminated by tourists, where you can stop for a romantic aperitif at sunset. 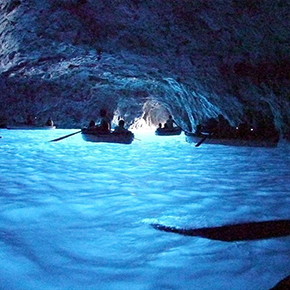 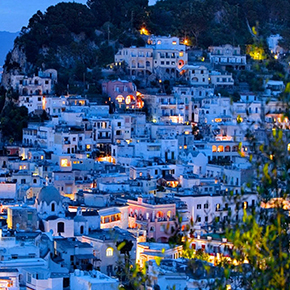 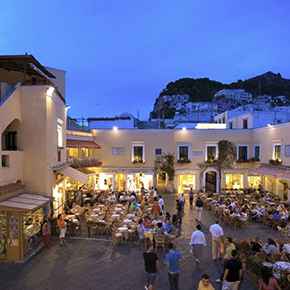 The island of Procida is the smallest of the Campania archipelago, the wildest and least contaminated. It can be reached by ferry or hydrofoil and the first impact with the island is given by the colorful collection of fishermen’s houses and the scent of lemons that fills the nostrils. A rainbow of colors that embraces and welcomes the visitor.

Along the Via Roma, you reach Punta Lingua where the Abbey of San Michele Arcangelo is worthy of note. It stands on the promontory of Terra Murata, overlooking the sea, where time seems to stand still. Also in this area, the Palazzo d’Avalos deserves to be visited, with an illustrious past, but later used as a prison, until a few decades ago.

Two beaches not to be missed are the Pozzo Vecchio beach, chosen by Massimo Troisi for some scenes from the film Il Postino and that of Chiaiolella. The latter is the most popular and unlike the others, it can only be reached on foot with 182 steps. 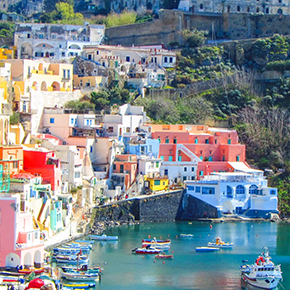 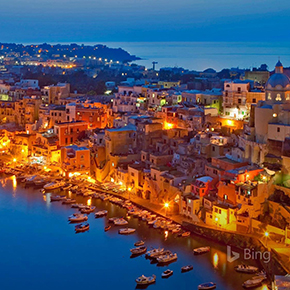 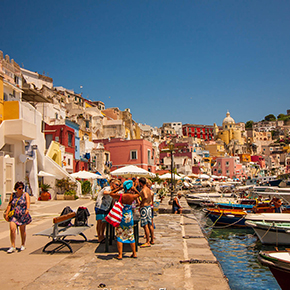 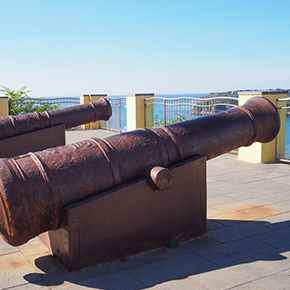